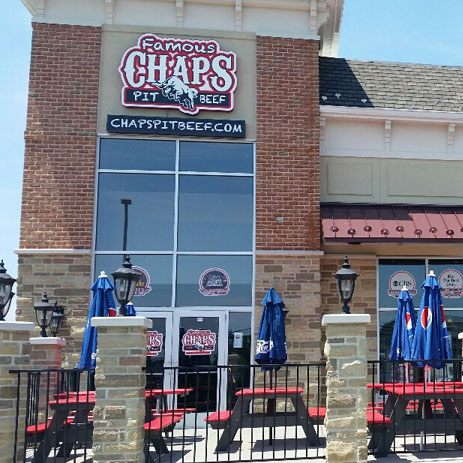 If you are in the business to join a franchise, then a surefire winner would be to pick a BBQ franchise. BBQ franchises are hot franchises right now because everybody craves a good barbecue and there is still a lot of variety in barbecues styles that you can still put your own personal stamp on your restaurant.

Whatever franchise you decide to join, make sure they have a strong brand that can help you attract customers and a menu that gets you excited to serve. As you start your research on franchises for sale keep these top 10 franchises serving BBQ in mind:

Famous Chaps Pit Beef is the brainchild of Gus Glava who owned a Southwest-themed night club on Pulaski Highway and his daughter and son-in-law. Back in May of 1987, Glava built the original Chaps Pit Beef on the grounds of his nightclub as a wedding gift for his daughter Donna and son-in-law Bob Creager who was working in a steel mill at the time.

The original stand was basically a 12 x 15 shack that shared the food license and even electricity with the nightclub. Bob would cook and Donna would manage the staff and eventually their business grew to not only allow for an expansion of their original shack, but also the addition of the new restaurant in Aberdeen.

Chaps Pit Beef has made a name for itself with its own personal stamp on Baltimore Pit Beef, barbecued beef that is crusty on the outside and juicy and almost rare on the inside. The meat is shaved into thin strips and heaped high on a sandwich.

If you like the idea of offering different styles of BBQ at your restaurant, then you might want to consider Famous Dave franchise. Dave Anderson, the founder of Famous Dave’s, prides himself on offering a variety of barbecues including Texas beef brisket, Georgia-style chopped pork and Memphis-style ribs.

Dickey’s Barbecue Put is a well-known name with over 400 locations in 43 states. Founded over 70 years ago, by Travis Dickey, these BBQ franchises all pit-smoke their meat on-premise and still offer free kids’ meals each Sunday.

Old Carolina Barbecue is an up and coming barbecue franchise. Right now they only have eight locations centered in Ohio but they are looking to expand outside the state fast. The highlight of their menu is their Carolina-style pulled pork, but their customers also love their beef brisket, ribs and pulled chicken and turkey, all smoked for up to 14 hours over hickory wood.

The father and son duo who created Jim ‘N Nick’s Bar-B-Q in 1985 has found a lot of success in the Carolinas, Alabama, Georgia, Tennessee, Florida and Colorado and now has about 30 locations. They have made a name for themselves by smoking their own pork served pulled or chopped with a vinegary Carolina-style sauce. They are also known for always serving up the best Southern hospitality.

If you want to serve barbecue further north, Dinosaur Bar-B-Que is a well-known brand along the Northeast Corridor. First opened in Syracuse, New York in 1988, now there are locations in Harlem, Brooklyn, Rochester and Troy, New York as well as Newark, New Jersey and Stamford, Connecticut. People line up for hours for their brisket which is pit-smoked for 14 hours and their slow-smoked St. Louis ribs. They are also known for being a prime hang out spot with its live music and extensive bar offerings.

This hot franchise first started in Arlington, VA, in order to provide the D.C. area with good barbecue now it is also located in Maryland, Texas, New Jersey, Missouri, Michigan and North Carolina. These restaurants also have a downhome Southern vibe. Their most popular dish of course is their St. Louis-style ribs served wet, dry-rubbed or sweet and the hickory-smoked pulled chicken and pork, but they also offer Delta catfish and chicken fried steak.

Opening up first in Knoxville, Tennessee, this BBQ franchise is now a well-known name throughout east and middle Tennessee. People come far and wide for their award-winning recipe for hickory-smoked baby back ribs. They also serve Southern-fried catfish and prime rib dinner.

Barbecue is so popular that even Heisman Trophy winner Bill Sims needed to get in on the action with his own BBQ joint and now he has more than 35 locations, mostly in Oklahoma right now. Besides the usual barbecue dishes, they also offer unique delicacies like smoked bologna.

Initially started as a catering operation by three college friends from the University of Alabama n Tuscaloosa, Moe’s Original Bar B Que can now be found in Alabama and Colorado. Specializing in Alabama-style barbecue, these locations offer their signature Alabama white barbecue sauce.

Chaps Pit Beef is served on a Kaiser Roll or rye bread which give an earthy flavor to the sandwich. What else makes this such a signature Baltimore dish is the sauce. Unlike other regions which use a mix of ketchup, brown sugar or vinegar to give the meat its flavor, the sauce used with Baltimore pit beef has horseradish sauce in it which keeps the customers coming back for more.

To make a Classic Pit Beef sandwich, Bob Creager uses a bottom round roast flat cut from the hind quarters which are a tougher, but more flavorful cut. He trims the gristle and silver off the meat and then applies a dry rub of different herbs and spices like paprika, salt and pepper, thyme and onion powder. He then lets it sit overnight and in the morning he puts it on an open pit of burning hardwood charcoal that gets to gets to about 400 to 500 degrees.

Once the beef has a nice crust on the outside and is tender on the inside, he slices it in ribbons and puts it back on the pit so he can cook to order for each of his customers. He always make sure to spread the meat around to add some char and flavor to it. Next he shaves the meat and piles it high on a kaiser roll and adds whatever fixings the customer wants, including Chaps’ special tiger sauce which is a mixture of mayonnaise and extra hot horseradish.

For more information about Chaps Pit Beef franchise opportunities, visit them at https://chapspitbeef.com/